INTRODUCING OUR SEPTEMBER 2020 FEATURED PROFESSIONAL OF THE MONTH REBEKAH FOSTER 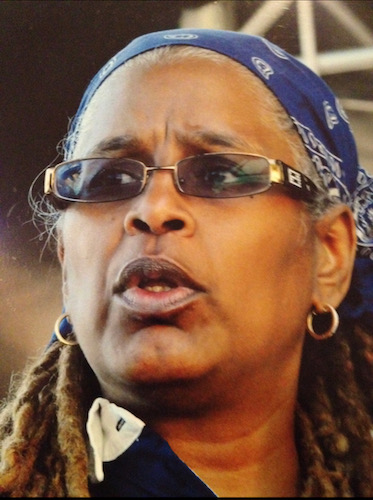 Rebekah Foster  has been in the business for over 35 years.  An unlikely profession for a Black woman who went to college to study sports medicine.  While in college, her passion for music, specifically audio engineering, could not be denied. She hustled! She was willing to work anywhere she could to gain experience and exposure. She put her heart and soul into succeeding in this industry, and succeed she did.  In 1987, she started her company, Ujima Sound Productions Ltd. Named after one of the principles of Kwaanza meaning Collective Work & Responsibility, Rebekah takes this to heart. It is how she has tried to live her life and run her company.

“ I figured if a client hired my company to assist them, I could have input on staffing thereby insuring that more of us were working “

As a child, she vividly remembers seeing the Jackson 5 and Sly at the Hollywood Bowl.  That concert started her love for live music. At the time, she did not realize or understand that God was preparing her for life’s passion which is her career.

Rebekah has worked with her artists at some of the most notable music festivals & venues such as the North Sea Jazz Festival, Glastonbury, Montreux , Lollapalooza, Smoking Grooves, Lilith, Carnegie Hall, The Apollo & Wembley. Rebekah honestly admits it has been tough but doesn’t regret the struggle. She was challenged due to her race and her gender.  Oftentimes, she was dismissed but she kept at it. Eventually learning all of the job positions. She even managed Grammy Award winning group Naughty By Nature for many years. These days, Rebekah works as a Tour Director, Tour Manager, Production Manager and as well as where it all began – as an Engineer.

Rebekah loves the music, her tour family, the travel and the audiences. She feels music is another expression of God’s love.  Rebekah loves the adrenaline of getting the show prepped, loaded in, up, executed and out to the next venue. “I love the process of the art as it is created from the inception to when it arrives at rehearsal until it hits the stage. Music is universal. It brings all these different people from different backgrounds together for one purpose. It is love in motion.”  She considers herself blessed to be a part of bringing that love around the world.

Given the current situation in the world, Rebekah is even more determined than ever to give back. While the live music business has basically been shut down since March, she has still found a way to give back. She still lives in the Bronx, which is one of the areas most adversely affected by the pandemic. She helped organize and volunteers her time at a food pantry, runs errands for the elderly, handles the day to day operations for her church while keeping up to date with all the changes that are happening within our still shut down industry.

Her biggest joy comes from the young people whom she has introduced to the music business. Since starting Ujima, Rebekah has had interns whom she has exposed to every aspect of the business. Some of these interns were able to travel the world due to their commitment to work, learn and listen. Some of who are now industry professionals in their own right.

Rebekah is the oldest daughter of the late, Rev. Wendell Foster and Mrs. Helen Foster. Rebekah attributes her exposure and love of God, music and the arts to her parents. Her mother introduced her to all genres of music. Her father, a writer and actor in his younger days, introduced her to the theater especially the Black theater. Some of her earliest memories are of being with actors and singers such as Ossie Davis, Ruby Dee, Linda Hopkins and Odetta. Her greatest joys while not on the road are cooking (she can burn) and spending time with her 9 year old niece, Nia.

She is thankful to her parents for their support and encouragement for her less travelled path over the years. It is Rebekah’s hope that more people of color and especially women of color can rise to the top and have equality in this industry. Most importantly, EVERYONE needs to get out and VOTE!!!