INTRODUCING OUR JULY 2021 PROFESSIONAL OF THE MONTH Krysten Dean 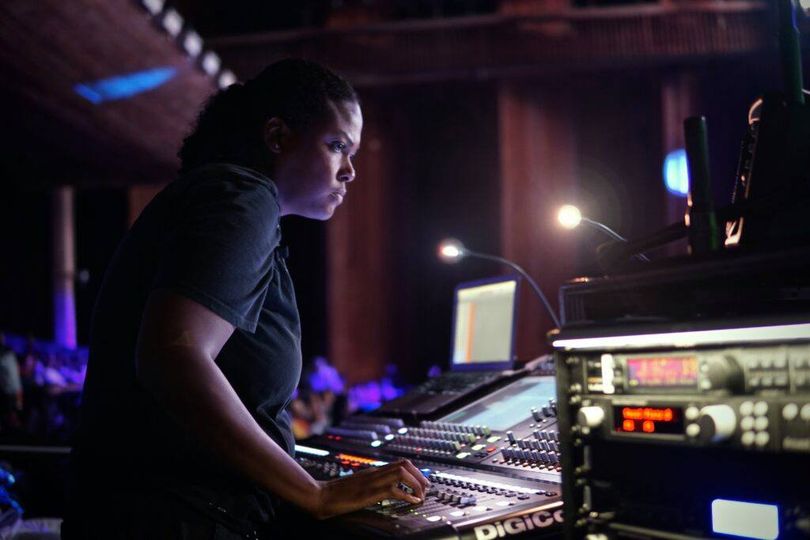 Krysten Dean is a touring Sound System Engineer and Crew Chief working for Eighth Day Sound Systems, but if you said Krysten on the road, most people would not know who you were talking about because everyone calls her “KD.” She has been working in professional audio for the last 17 years after quitting her corporate engineering job. She has toured with JayZ, Beyonce, Lady Gaga, Rihanna, Earth, Wind and Fire, Drake, and Madonna to name a few. She is also an entrepreneur working to introduce more women and people of color to the technical side of the touring industry, through what she likes to call S.T.E.M.M. – Science, Technology, Engineering, Math and Music.

An Early Love for Music and Audio

KD grew up in a musically inclined family, with her mom and grandfather being singers, and she and her siblings all learned to play a musical instrument. She also was a member of choirs. Her love for audio started in her youth when she volunteered on the media team at her church. There she learned the basics of audio. KD says she enjoyed it all.

But when it came time to decide on college and a career path, KD was discouraged by educators from pursuing a career in the music industry. So instead, she went to college for mechanical engineering. After graduating with a BS in Mechanical Engineering and Masters in Science in Mechanical Engineering, she went on to work in the auto industry for eight years, where she found that she was pretty unhappy. She decided to quit her job and go back to school to become an audio engineer.

She says, “I knew I had to take a chance and bet on myself so that I could be happy. I secured an 85% scholarship and attended Full Sail.” She graduated from Full Sail with an Associate of Science in Show Production and Touring.

The Importance of Giving People a Chance and Mentors

After graduation from Full Sail, she would hone her skills as the technical director for her church. At the same time, she applied to Eighth Day Sound, where they took a chance on her. KD says of Eighth Day, “My boss really took a chance on me. I sent in my resume with no touring experience and little audio experience and he took a chance on me. He told me that someone smart enough to have a successful engineering career (with a master’s in engineering to boot) could learn how to do audio. Especially if they were passionate about it.”

She also had a co-worker who took her under his wing and introduced her to the touring world, which helped her navigate the touring culture. After a brief 6-month internship where she learned company culture and basic tour packages, she was sent out on tour. She says, “It was fast-paced and exhilarating for me and a welcome change from corporate America.”

Her corporate background did prove beneficial as working in the corporate world provided KD with a strong work ethic, and she says, “I am not afraid of the long hours, the grueling pace at times and the commitment required for touring.”

Before COVID hit, KD spent a good portion of her year on tour. Her long-term goals include establishing an organization to encourage minority women to become involved in the entertainment industry’s technical side. She says, “I am passionate about seeing people that look like me, doing what I am doing. By that, I not only mean women but people of color. There is something to be said about representation and achievement. I want to give back and make a difference.” Recently KD started an organization called KMissionD (pronounced ka-miss-ion-ed) to encourage more women and people of color to pursue STEMM.